Alternatively titled: How to child-proof your copy of Sims 3, if you feel that’s important to you.  Why would a child be playing The Sims, you ask?  The reality is, some children do.

This game was purchased during a sale on Steam a few months ago; while it’s usually priced way out of my budget, it went down to ~$5. (It’s a gimmick; they want you to buy the base game at a low price and then cough up $30+ for expansion packs. The base game’s fun enough, though.) So I started playing it….  And I guess you could say I’ve fallen down the rabbit hole and have little desire to climb back out. 😀

There’s something altogether fascinating about being able to create entire worlds (rather, towns) full of people — people that look and act, for the most part, like the OCs from your stories.  For example, the Secrets in Seaport family lives on as people in The Sims 3, unhindered by my infernally cheesy words.  Abby is perpetually grumpy but doing very well at school; Ian became a professional author; and Aunt Melanie is now happily married and the mother of a beautiful baby son.

A necessary aspect of life and The Sims is reproduction (which is partly why the game is rated T).  For your Sims family’s legacy to continue, it is only right that they bear heirs, you know?  My general practice has been, get the family-oriented Sim parents-to-be to try for a baby in their home … and immediately zoom all the way out to map view so I don’t see them doing it.

I won’t peek because I genuinely don’t want to see it (and there isn’t all that much to see either), but in theory, let’s say someone has a child in their life who might.  Or an obnoxious “friend” who’ll insist on making you watch in order to “liberate” you from your prudishness.  Again, this is purely theoretical.  Ultimately, for whatever reason, someone don’t want to see this stuff in the game, and there’s a solution.

I found the following two resources incredibly helpful in setting up my copy of The Sims 3 so that it is devoid of elements that would make me uncomfortable as a, well, sensitive player.  If anyone else is in my shoes, perhaps this will be of help.  Laugh all you want, but if you’re laughing at me, this post probably isn’t meant for you.  Go breed some Sims the old-fashioned way and leave me in peace.

An online treasure trove of free, custom content for all the games in The Sims series is the site “ModTheSims.info.”  Some content depends on how many expansion packs you have installed, while others rely solely on the base game.  The site also has great, easy to follow instructions for unpacking custom content and installing it properly for your game.

The first downloadable patch I found deals specifically with disabling the “WooHoo (Intimacy)” option that comes up when romantically attached sims lie in a bed together.  The patch creator linked to it in this forum thread — don’t let their slightly rude-sounding download URL fool you, it’s legit.  (Your mileage may vary if you have expansion-pack objects which create more opportunities for adult behaviors.)

So with this first patch installed, your Sims won’t act like birds, bees, or normal human beings anymore in the privacy of their homes.  But part of the beauty of playing Sims is being able to raise children, right?  This next resource offers you the option of the Sims reproducing asexually.  Like plants. 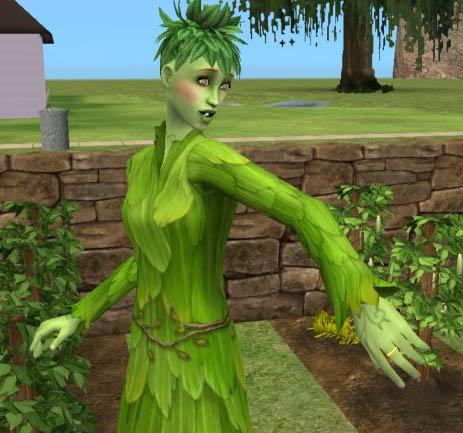 Yeah, there are plant people in The Sims.

Caveat: this mod, in its full capacity, allows biologically male and female characters alike to become pregnant.  It also allows for teenage characters to become pregnant, as well as elder characters, who previously could not.  That said, the pregnant male function is generally glitchy; that may deter experimenting.  If any of that bothers you, you’ve been warned.

As McCloud would say, there you go!  This combination of mods is by no means the right option for every family, however conservative or permissive; but it works for me, a still-sensitive young adult who uses The Sims 3 as a worldbuilding tool (and a highly addicting pastime).