So this past summer, I visited Israel for the first time in nearly a decade.  I visited the Western Wall once, but generally avoided most of the toursity attractions that had caught my family’s eyes the last couple of times we’d set foot in the Holy Land.  (Shout out, however, to the Katros House Museum in Jerusalem for having some of the best AC in their lobby on my first day in town.  I’ll have to be more touristy and explore the rest of the building next time.)  When I wasn’t taking my correspondence courses or holed up indoors, safe the midday heat, I spent my time reconnecting with old friends, made some new ones along the way, and enjoyed the uniquely delicious Israeli iced coffee wherever I could find it. 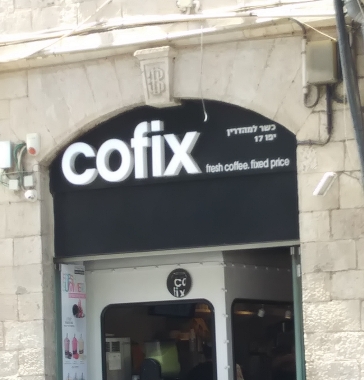 The happiest place on Earth, in my humble opinion. #notsponsored

One of the other highlights of my trip was attending a showing of Hamlet, put on by a local English-speaking company called Theater in the Rough.

Theater in the Rough is a group of committed, community-minded actors and theater-makers, amateur and professional, dedicated to bringing quality, affordable theatrical experiences to the Jerusalem audience. It’s theater for the people, by the people.

Our main project is Shakespeare plays presented free & outdoors, moving through locations with the audience in Bloomfield Gardens, Jerusalem, a centrally located urban greenspace. A varied audience of around 2500 people each year, made up of all of Jerusalem’s cultural and religious communities, experience accessible theater in public spaces

We make the play accessible for multi-age audiences by creating intimacy between actors and audience and emphasizing storyline through language and movement, overcoming fear of Shakespeare. Audiences rediscover public spaces through free summer shows.

For the entire month of August, in a lovely park behind the King David Hotel in Jerusalem, this company acts out a Shakespeare play — in motion.  For various acts in the play, the actors and audience would move all around the spacious expanse of green; the natural decor and sculptures within the park become the set pieces. 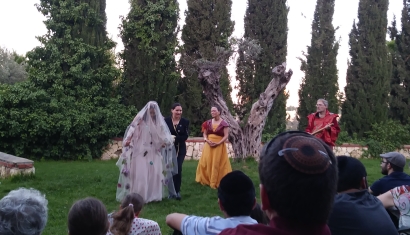 Ophelia, the disgraced bride, with Laertes her brother, and Hamlet’s aunt-and-uncle-parents.

Past performances from Theater in the Rough include Twelfth Night, Macbeth, and The Taming of the Shrew.  Though I consider myself a literate person, until now, Shakespeare has never really held my attention.  I’d read someone’s unfinished novelization of Twelfth Night some years ago, but the original plays’ texts positively confuzzled me.  Hamlet was a favorite of my grandpa’s, however, and I’d once started watching the BBC’s screen adaptation with David Tennant and Patrick Stewart because that seemed a little more palatable to my geeky self.  So Hamlet has somewhat of a special place in my heart for those reasons, but I’d never been able to fully appreciate it or understand it until the night my friends and I went to see Theater in the Rough perform Hamlet in Motion.

Suddenly, I had context.  Perhaps a little too much context, actually.  (“The Lady doth protest too much” is an incredibly sad and antifeminist line when recited in context, for example.)  Hearing Shakespeare’s archaic language being recited — no, performed — like realistic conversations made all the difference to me.  I saw people with stories, not words on a page.  For such a tragic play, it had so many funny moments too. 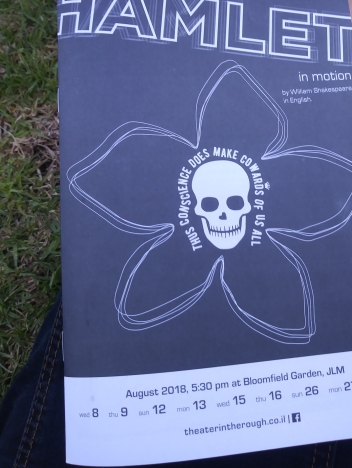 “Thus conscience does make cowards of us all.”

The performance itself, as minimalist as it was for all intents and purposes, was terrific.  Hamlet was brought to life as this “emo,” angry young man decked out in black and a hoodie.  The “aunt-mother” and “uncle-[step]father” had such amazing onscreen chemistry as well.  There was even a bard who would play a variety of instruments — plus, he’d serenade the audience as we were escorted by volunteer staff from one performance area to the next.

No actor was limited by their actual gender when taking on the mantle of a character — Horatio and Laertes, for example, were each played by women.  Also, oftentimes, a supporting actor would play more than one character, with a simple garment or accessory change signifying the role-swap, but they were completely distinguishable from each other.

I think what was most enjoyable to me, as an impressionist, was hearing the plethora of accents the actors had.  To be honest, I’d initially feared that it’d be a heavily Israeli-accented performance, but my fears were soon assuaged.  Some of the players hammed up that British RP, some seemed like were actually from the UK, and others were clearly unashamed of their North American origins.  There was cohesion without uniformity, which is perhaps a reflection of the diversity of Israel’s greater population.

The concept of free Shakespeare in the Park events originated in New York, with the annual New York Shakespeare Festival, but its reach has clearly expanded beyond North America.  I would speculate immigrants to Israel brought this piece of Western culture with them, and if that’s true, I think they’re better for it.  In America, I admit I would’ve likely stayed home if a similar event were going on, due to my general unfamiliarity with Shakespeare.  But as a lone traveler in a foreign country, congregating with fellow English literates to see such an immersive Shakespeare performance was just what I needed to ease my homesickness — and, more importantly, open my eyes to appreciating the Bard’s wit and writerly prowess.